We have a new website for the farm - olelakefarm.com  and we will be blogging there from now on.  You can see our new post here:  https://www.olelakefarm.com/blog
Posted by Debby Flowers at 6:07 PM 4 comments:

It's raining and we are so happy about it!  June has been so dry this year.  We are getting a good soaker with heat predicted - that corn is really going to grow now!

Despite the dry conditions, the oats looks pretty good.

The pigs and their house and paddock move frequently - every few days or at least one a week.  Usually it's just a few yards to a new patch of ground but on Sunday they had a longer distance to go - kind of a piggy adventure I like to think but in a confined way.  After removing the supporting fence posts, Kevin hooks on to their house with a tractor and slowly moves to the new location.  We pig wranglers guide the fence panels and make sure they stay upright and contain the critters.  This time the move was around the garden, through a disced up patch, then up onto the driveway and down to the barnyard, stopping behind the Winter Coop.  This area is fairly low, has deep black dirt and lots of weeds.

The move in progress: 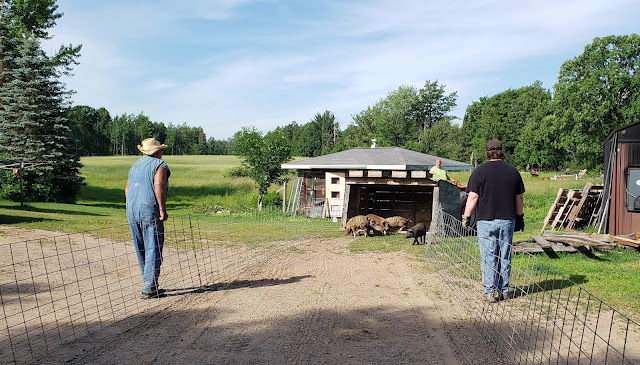 And where they ended up behind the coop. 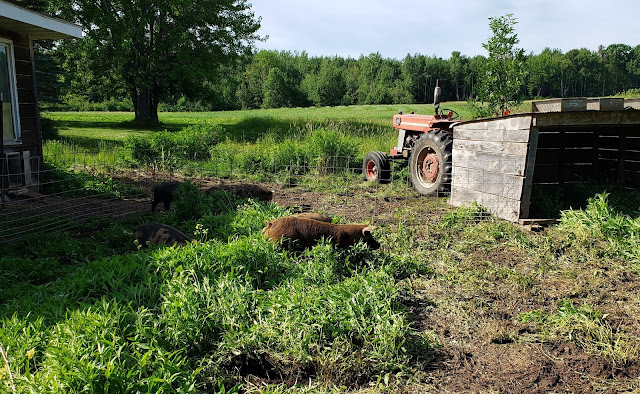 The pen curves around the side of the coop so the pigs are well aware of when I am out feeding the chickens.  You would think they were starving the way they carry on!

Speaking of chickens, the littlest chicks are doing well and have no problem getting their share of the feed! 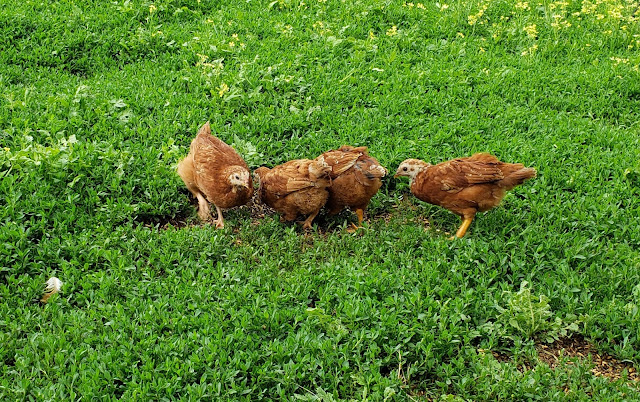 We should have a third batch of chicks hatching this week.

More hay has been put up but I didn't get any photos.  That project will continue though.

I have a photo of the garden to share.  It looks a lot different that in years past but it works for me. To the back are tomatoes, the garlic, then some pots of kale, and the straw bales with cucumbers, melons, squash and pumpkins.  The circles have peas and beans with potatoes in the middle.  There are more planters to the far left with greens.  I  have managed to spread more wood chips out there but as you can see I have a lot more of that to do.

And that is the update for tonight.  Thank you for stopping by the blog, and until next time, be well friends.
Posted by Debby Flowers at 6:58 PM No comments:

If you read last week's post, I hope that you did not get the impression that the murderous dog had killed our whole flock - thank goodness it was far from that.  Since I was home and caught it in the act, only four chickens were killed: two hens and two of the older chicks.  Mama Hen II was missing and I was afraid she was gone although I knew she was not one of the dead hens we found.  We put on a heat lamp for her little ones and after two nights like that she showed up and resumed her duties. 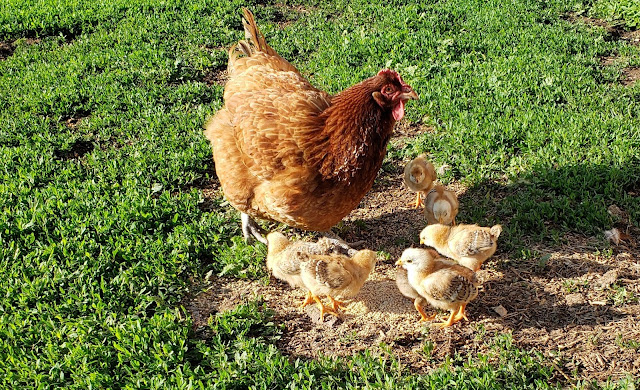 The flock was really scattered and scared - it took a few days for them to settle down - it was difficult for me when they ran away from me instead of running to me.  In that respect the flock is back to normal.  We are getting many fewer eggs, and Rafael has just started crowing again.  It was altogether a traumatic experience all around.

The summer rolls along - haying season has begun with the cutting and baling of one little field.  The hay there was pretty sparse but it needed to be cut.  Son Kurt was working so it was looking like I might have to help but I got a reprieve when Ardis came to my rescue and drove the tractor and baler. 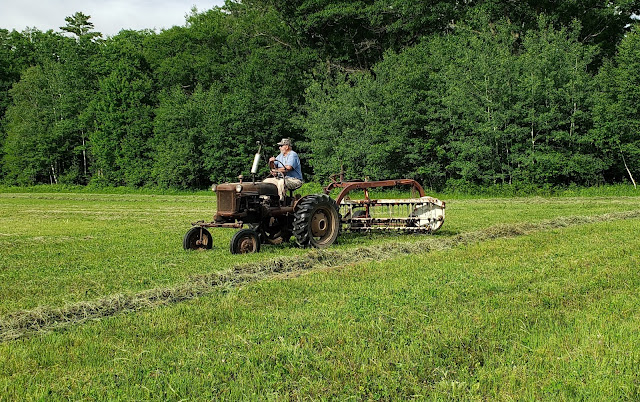 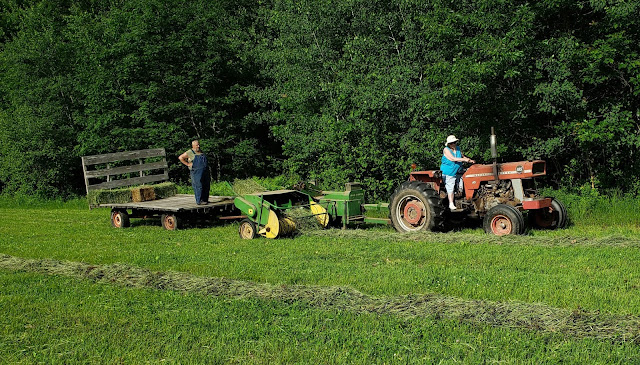 The roses at the garden corner are just wonderful again this year, and so far, no bugs! 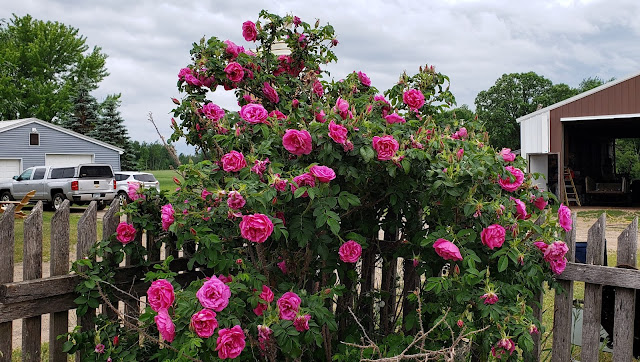 Yesterday (Sunday) we had a funny little thunderstorm - what they call an isolated storm I guess - we are the blue dot.  It didn't last long - we could really use a good all day soaker. 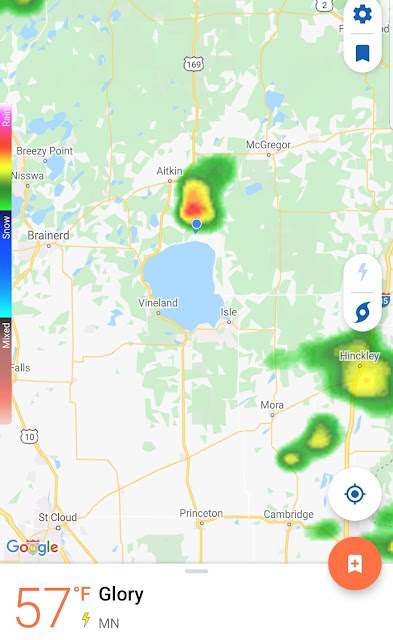 Yesterday Kevin celebrated Father's Day by bringing home his new (to him) tractor.  It's not green... 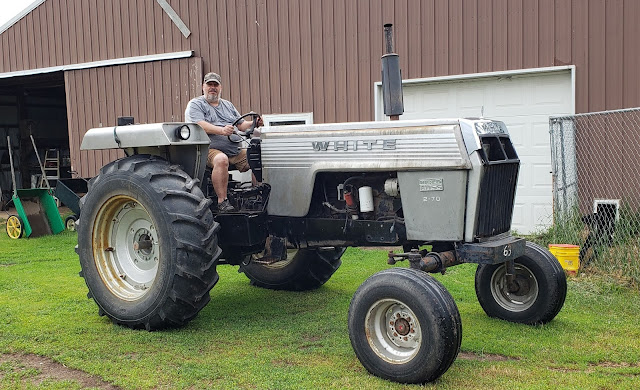 I will close with a little pig happiness.  I made a mud-hole for the pigs today - it wasn't especially hot but they certainly enjoyed it anyway! 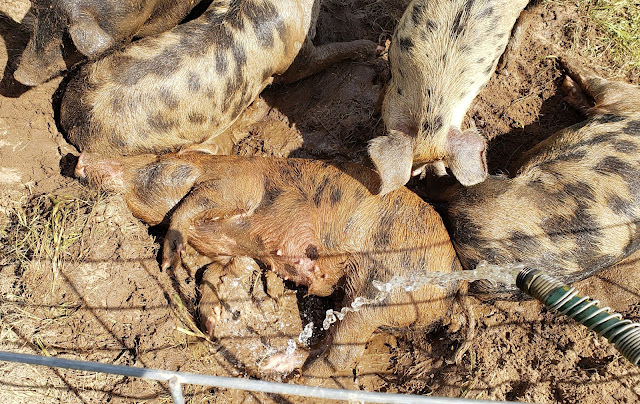 Until next time, be well and be safe friends.
Posted by Debby Flowers at 6:49 PM 2 comments: 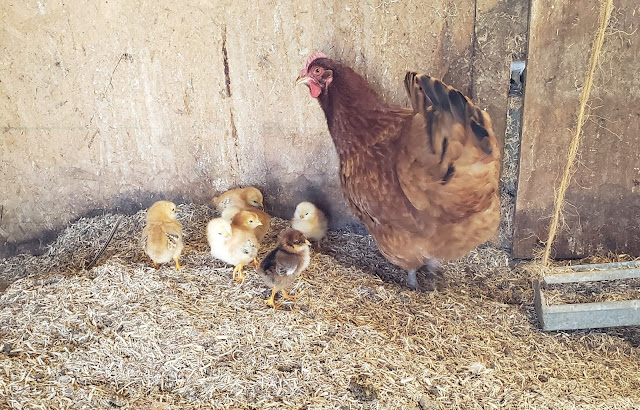 Seven in this batch again.

And the first batch of chicks getting so much bigger.

But tonight as I sat down to put this post together, our neighbor's dog was busy killing my birds and harassing our other animals.  The windows were closed.  I didn't hear but Hoover did and let me know. 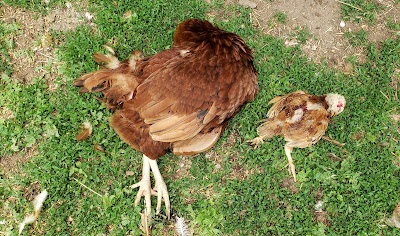 That's all I have tonight.
Posted by Debby Flowers at 7:16 PM No comments:

These last couple of days have been warm in our area - high 80's today and we don't have our air conditioners installed yet.  One more warm day and then it looks like we have a string of cooler ones coming and some rain which we can always use.

My sister Carolyn has pointed out to me that I haven't mentioned Spot, our elderly cat recently.  She's fine.  After a long winter of enjoying life indoors, she is now venturing out again - apparently just to try out different napping areas: 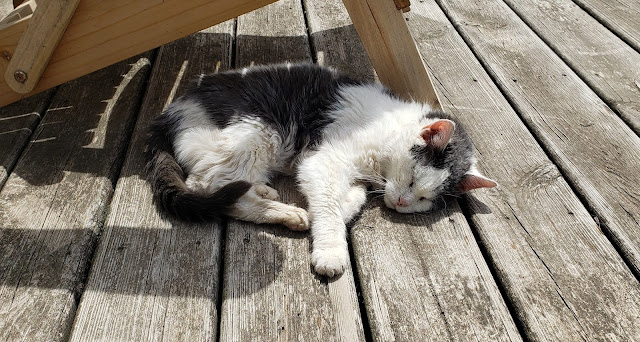 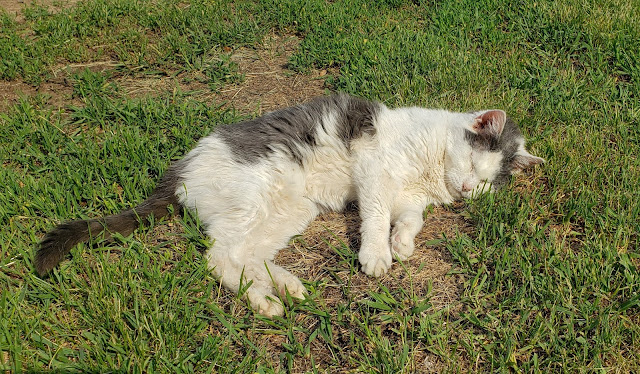 The pigs are homed in a portable pasture shelter with an attached paddock made of wire fence panels.  The original plan was to moved them through an area that was planted with buckwheat last year.  The buckwheat was mowed down but not combined so the thought was that it would be thick with self seeded buckwheat this year.  Strangely, very little of the buckwheat came up and while the pigs enjoyed rooting up the soil there, green food was lacking.  This weekend they and their shelter and pen were  moved to the summer coop chicken pasture which has very long grass.  They seem to be enjoying it there. 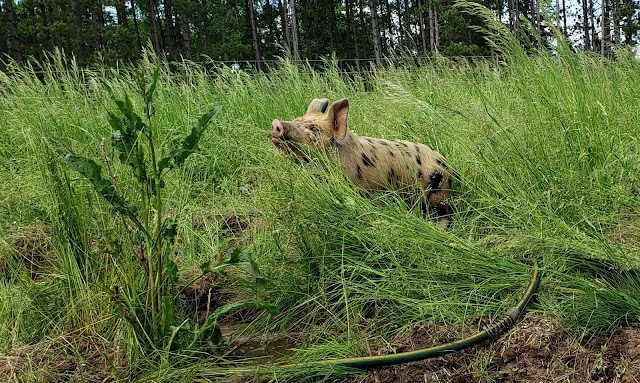 While taking pictures I happened to catch one of the pigs upside down - he had crawled into the trough of water for a brief soak and then just rolled out! 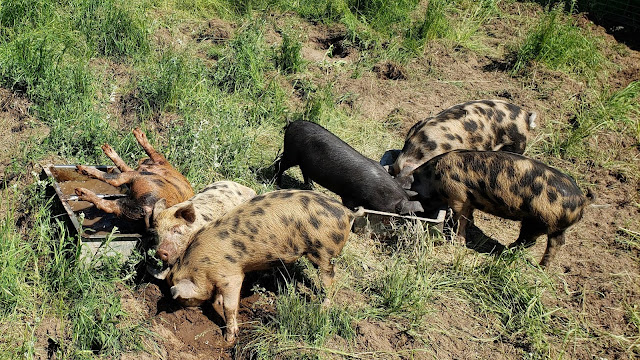 And here is a little oddity.  I found this old bucket smashed flat out in the woods in an area that the guys had been cutting wood in this spring.  Since I like rusty old things and it still resembles a bucket, I hung it on the garden fence.  Unfortunately the birds perch there a lot and have pooped all over it.   One of them left a surprise! 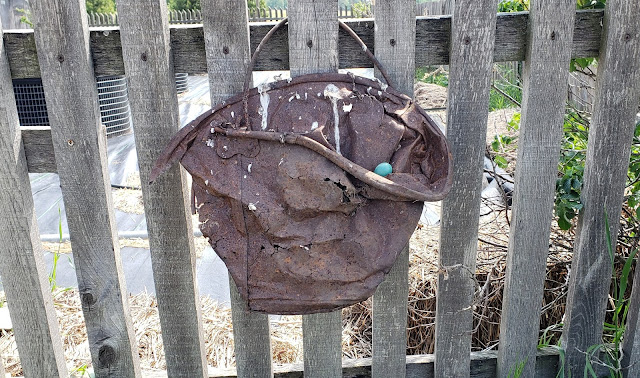 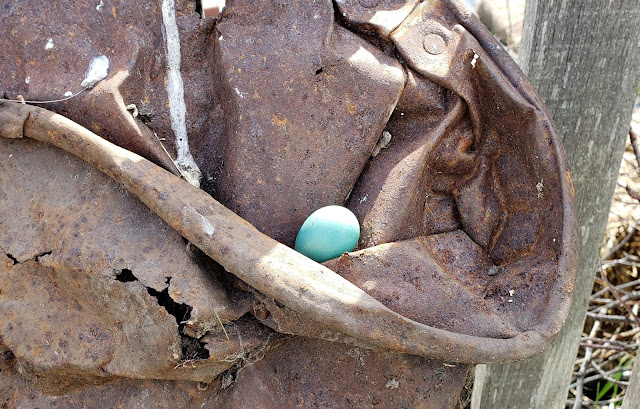 I will close with an updated View from the Milking Stand.  I love green! 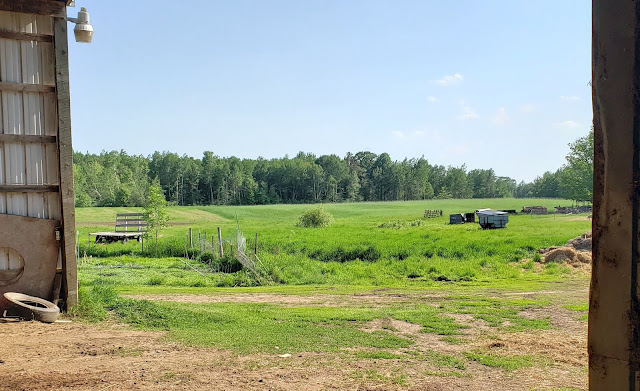 Thank you for stopping by the blog, until next time, be well and stay safe.
Posted by Debby Flowers at 7:05 PM 2 comments:

I wish everyone in our country could push a pause button and just breathe for a minute.

Despite the sad and horrible events going on in our state and country, life goes on here on the farm.

Hoover and I ventured out to the woods for a short walk yesterday - very much a hurried one as the mosquitoes were pretty bad.  I could hardly stand still to get a couple of flower pictures - many of the spring blooms are gone now but new ones come along - Hoover provided a background for one of  my favorites - the columbine. 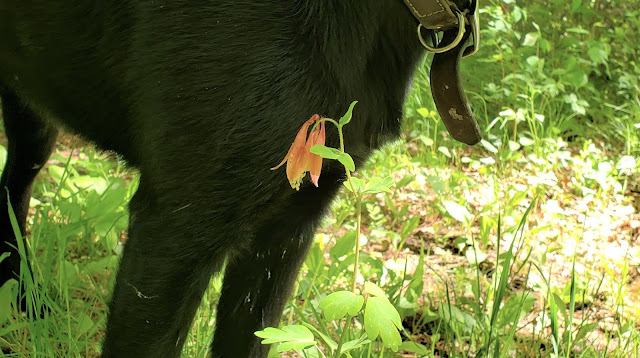 Rollie has been working to complete a two year project - re-roofing our house.  He built this section in the 70's and this is the second re-roofing since then.  It's a pretty strenuous job for a person of a certain age but he works on it in sections, and takes plenty of breaks as needed; Ardis keeps an eye on him for safety lends a hand now and then.  THANK YOU ROLLIE!!!!! 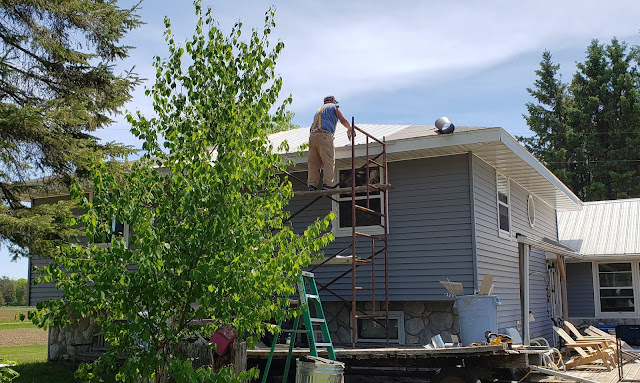 Both of the kids left yesterday to move on to a new farm.  Dahlia was due to go and it worked out that her new owners were willing to take Briar along too.  It's always hard to let the kids go but at least they went together and the transition will be easier for both of them. 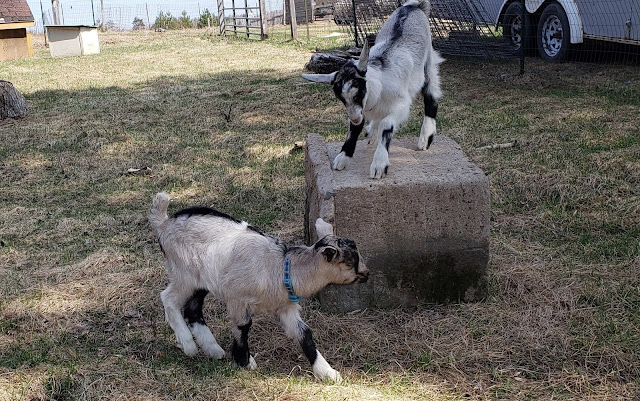 The pigs have settled in and got their first taste of whey (from cheese-making) - they liked it very much!

The garden is planted - more or less.  We had frost yesterday morning so I had to replace some of the tomatoes today and will be replacing more of them from the looks of them.

And that is the update for this week.  I'll post again next week as usual and until then, be well friends and have peace.

Memorial Day is a day to take time to remember that many, many people have died serving our country and protecting the rest of us. Memorial Day 2020 has been quite different than most - no ceremonies or events - but I hope that most people took the time to recognize the day in their own way.

Another favorite spring flower to share - we call them cowslips, other folks call them marsh marigolds or swamp marigolds.  Whatever the name, I love them!

Our first batch of chicks hatched last Monday but I didn't get a look at them until Tuesday - Mama Hen is very protective! 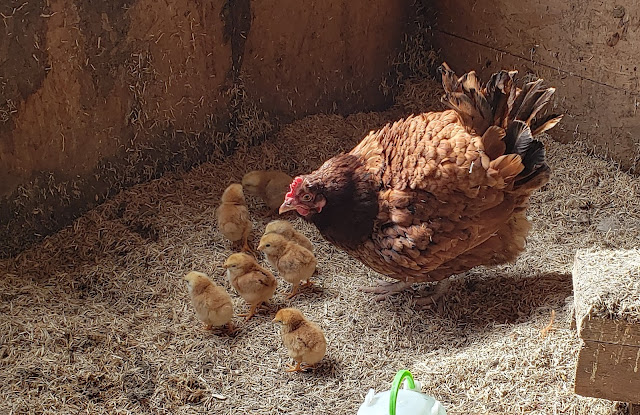 A week later, they already have little wing feathers coming in.  Mama hen does a great job of showing them how to scratch the soil, what to eat - just how to be a chicken! 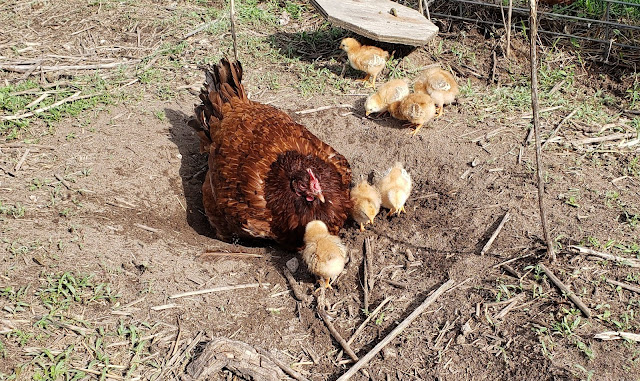 Saturday we had our first farmer's market of the season in Aitkin.  It was really different, trying to go by the guidelines for distancing, mask wearing, etc.  Some of the customers were masked and careful not to handle items but other just reached across the dividing table and picked things up to examine them.  I guess we just have to do the best we can with it.

Yesterday (Sunday) we picked up six porkers from farmer friends.  Kevin lifted each one out of the trailer and put them their new paddock. 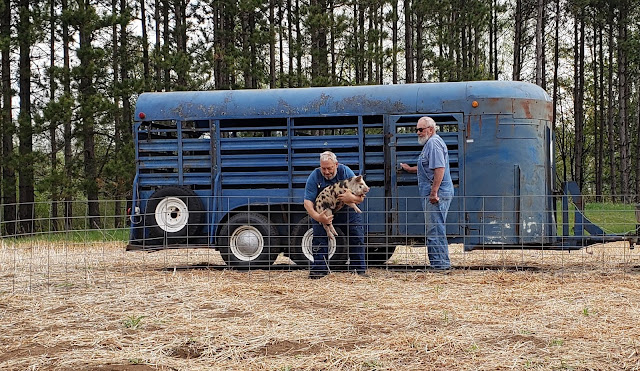 They settled right in: 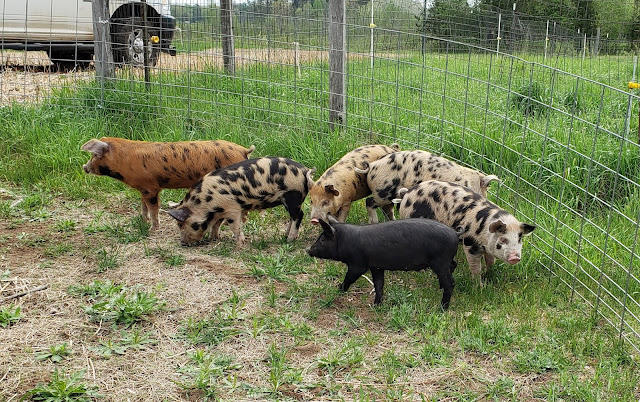 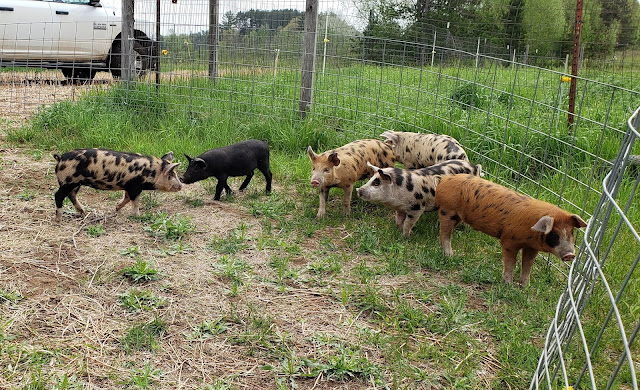 These are all litter-mates - quite colorful aren't they?

As far as other farm activities, the corn is planted and part of the garden.  We have been really hoping for rain and have gotten some, but not the good soaking rain that we need.  They are giving a 50% chance of rain both tonight and tomorrow so maybe.

Next week there won't be any new critter news to share but I will be back with an update anyway.  Until then, be well friends.
Posted by Debby Flowers at 5:51 PM No comments: