Wow, almost Christmas!  I should be wrapping gifts at this moment, but thought I would take a few minutes to put a blog together... then I'll get to that.   I'm starting with a few pictures I took yesterday.  The sun was out and the snow so pretty.  Above is a view of the farm buildings from the backside.   Was Rollie being creative with the siding on the back of the pole barn, or just being economical?  I don't know if you can see it very well, but the woodshed has a pretty good supply in it already.  Rollie, Kevin, Ardis, and Kurt all contribute to that effort. 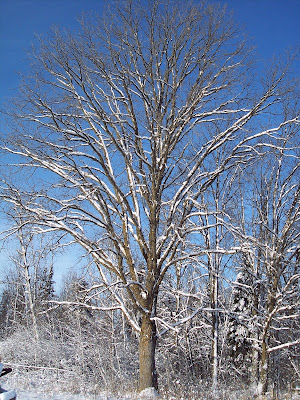 My last post was from before Thanksgiving I think.  I hope you all had a pleasant holiday; we sure did.  Since then the weather has been typical Minnesota... you never know what your gonna get.  Some unseasonably warm days, some really cold, and some in-between.  Last week was particularly nasty with some freezing rain and ice-coated roads followed by snow.  I am driving Little Blue Subaru these days, and it's pretty good in the snow, thank goodness.  I really, really love the heated seats - what a great invention!

The pigs are gone now which means less chores to do in the cold and early darkness.  Also, we don't have the horse related chores this winter.  Running water to fill the big water tank and making sure it stayed plugged in wasn't much fun.  That said, we do miss them anyway.

In the Winter Coop, there are three more hens that my cousin Richard agreed to part with.  Now there is one more of the Dark Cornish, which are such striking birds, and for the first time in many, many years, white chickens, two of them.  We don't know for sure what breed they are since they came from a mixture of chicks, but I think they could be White Wyandottes.  There are a couple of other white feathered breeds that lay brown eggs though, so we'll never know for sure. 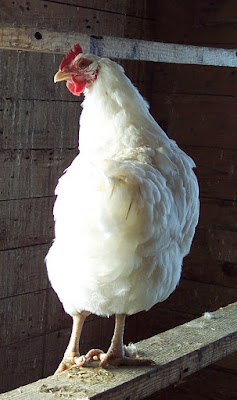 Today had us doing some goat chores.  Kevin and I cleaned out the does indoor pen, which was starting to feel like walking on a pillow-top mattress because the hay and straw was getting so deep.  Everyone got a hoof trimming, and Ranger moved back into the bachelor pen with Forest, and Daisy came back to the doe pen.  I am still milking Vinca twice a day; she's giving a little better than a quart most mornings, and a little less than a quart most evenings.  I will have to cut her back to once a day at some point, and then dry her up, but am in no hurry to give up the milk.

So there is your update.  I'll be back in January sometime.  Until then, I wish you all a happy, safe, and healthy holiday.  Be well!
Posted by Debby Flowers at 2:28 PM No comments: