It's been about a month since the last post here.  In that time we have had a couple of holidays and some crummy weather.  You locals know all about it - lots of snow, cold, more snow, then rain that froze - what a slushy mess to clear up - heavy stuff!

A few years ago, one of my very first blog posts was called Rescuing the Avalanche Victims - or something like that.  The snow comes off the north roof of the pole barn and blocks the little goat door.  That year I had to tunnel them out and it took  most of a day.  This time wasn't that bad.
Vinca, Echo, and Hickory came out, looked around and went back in.  They sure look grungy compared to the white snow - especially Hickory - He reminds me of a polar bear on the ice cap.
Poppy and Tamarack didn't get blocked in but when the snow came down on the south side of the hayshed, they got a big ridge of hard packed snow to play on.  Thankfully, they didn't figure out that they could have easily jumped over it and gotten into all kinds of mischief.

Since those pictures were taken, we have done some rearranging.  Tamarack and Poppy have moved back in with Vinca and Echo. Hickory moved into their pen after Kevin and Bob(cat) dug that snow away.

Rafael and the hens, and the turkeys Tom and Peanut have been getting outside some too. 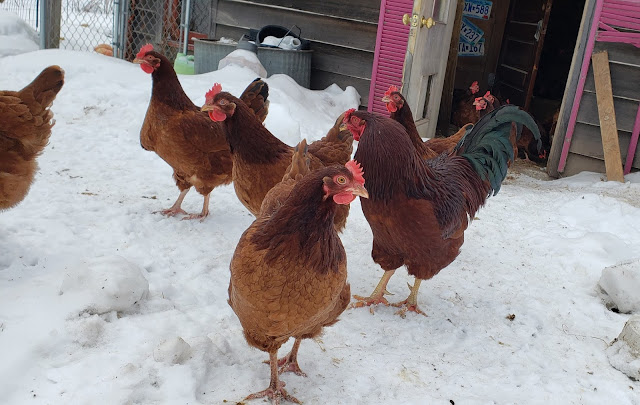 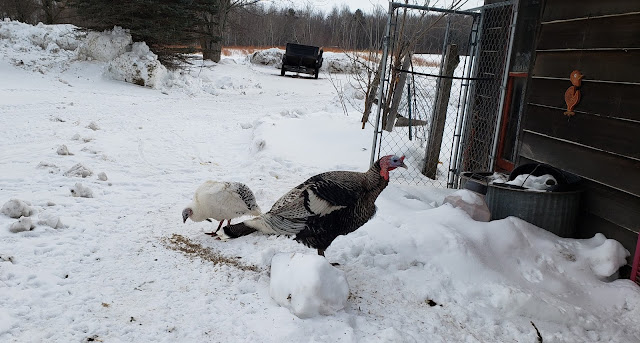 The hens are laying very satisfactorily now, and Peanut has been laying an egg every other day too!

Three new hens came to our place from friends Bonnie and Duane - they are Buckeyes saved from Bonnie's canner.

Buckeyes are a heritage breed of chicken originating in (of course) Ohio. They are said to be quite docile, cold hardy, and good mousers!  Rafael is also a Buckeye.

Hoover and I have been walking the logging trails on the weekends.  He has to be on a leash to prevent him from following the deer trails and potentially chasing them.  He enjoys our outings anyway.

As usual in the winter, the guys are putting in a lot of time in the woods.  Usually Kevin cuts the trees down and Rollie pulls them out to an area where they can be cut up.  Some of the lengths are cut up with the buzz saw, and the bigger pieces need to be split.  Team work gets it done more efficiently.

We will have a post again in a few weeks - by then we will really be looking forward to Spring I am sure.  Until then, be well friends!

Posted by Debby Flowers at 7:00 PM